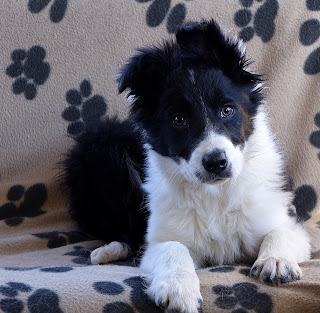 Why do we use the word “no” if it doesn't bring long lasting effects? Like with all punishment it may bring a temporary relief for you. If you yell “NO!!!” and the dog stops what he was doing, it reinforces your behaviour of shouting “no”. It worked for you, maybe only for a moment, but your brain noticed it and it will suggest this solution next time as well. It doesn't matter much that you have to say it 50 times a day, it gives you tiny periods of relief, that's enough. If you are not aware of it, you'll keep doing it and maybe think that it's a normal life with a dog. But it doesn't have to be.

A few years ago I fostered a deaf collie puppy (the one in the picture). Because “no” would not work, I had to do something else to stop him from getting in trouble. After a few days I noticed that I almost completely stopped talking to my dogs. And guess what? The life was normal as always, I was communicating in different ways with them. It was a game changing experience. Although I'm pretty quiet anyway, I became more attentive to what they were doing and would rather get up than talk to them. A few times I caught myself walking up to my own perfectly (albeit selectively) hearing dogs to interrupt what they were doing instead of just using my voice. After the puppy found his forever home everything went slowly back to normal but I still remember this experience and still think about it a lot. Most dog owners would benefit from spending a while with a deaf dog. Please understand that I do not advocate not talking to your dog, believe me, nobody chats up their dogs more than a single, female dog trainer. I literally have entire conversations with them on a regular basis, but “no!!!” has no place in these chats.

So you may have already noticed some tips in what I wrote before, on what to do instead of saying “No”. Well, my preferred method is to interrupt – redirect. Sometimes, if safe to do it, I simply ignore the behaviour completely, all the time watching for something to reinforce. If I choose to interrupt, there are things to consider. Shouting “No” is also an interruption but we already discussed why we don't want to use it. In many situations I will say my dog's name, which will cause him to look at me, and then I tell him what I'd rather he was doing. So, let's say Chester is starting to eye another dog (he is a Border Collie, after all). I could shout “No!!” but I normally say: Chester! - probably a few times, as he gets very unresponsive at these times - and when he looks back, I call him to me, ask him to lie down and stay. He gets a stream of cues that he knows very well and can perform even with distractions, and this is when it gets a bit hard for some dog owners. I teach my dogs all these behaviours first. If they don't know them, they should be on leash or under other means of control. It is far easier to yell “no” than to actually put effort into teaching the dog what you mean by all the other cues. But it's a fair and kind thing to do. Always, always redirect with a well known cue.

The way to interrupt something can take different forms. There are times I touch my dogs to get their attention. And then redirect. Put that attention elsewhere. This is what I was doing when the deaf puppy lived with us. No words, only gentle touch or a tap or lifting him up and placing somewhere else. But that's for everyday living, and when you have already taught the replacement behaviours. If you take your dog to classes, they should teach you pretty much everything you need. However, chances are you'll be encouraged to say “eh-eh” whenever your dog makes a mistake. This may be called a No Reward Marker (NRM), especially if you use a clicker (or the word “yes”) to mark the correct response. You say “sit”, but your dog looks at another dog and takes a step towards him. “No!!!!” (punishment). Or you say “stay”, take a few steps back and your dog gets up. “Eh-eh!!!” (NRM). And then “Stay!” again. There are a few problems with this approach as mentioned in part one of this article.

When I teach my dog a new behaviour I really want it to be a fun event. I want him to be engaged and curious, and try new things without any fear of failure. I want him to feel like a superstar and have lots of successful trials. “No”and “eh-eh” bring an element of uncertainty to training sessions. If he tries and makes a mistake he will be punished by my sharp voice. I don't want it to happen. I have two dogs of herding breeds and they are super sensitive to my moods. My collie Chester shuts down when I say anything negative. I used “No” and “Eh-eh” with him when he was younger and I'm still paying for that. My malinois has been trained without many negatives and is an entirely different dog. As a puppy he had no interest in training whatsoever and would frequently walk away and go to sleep in the middle of a training session. It took a huge effort to increase his motivation and now he loves it but he is still a sensitive dog and I have to be careful how I respond to his mistakes.

So what do I do instead? I use two methods that I took from other trainers. One is called the Least Reinforcing Scenario, and was first used and popularised by Ken Ramirez (I mentioned him in part one). In essence, when the dog makes a mistake, I pause the training for a moment and then ask for some other behaviour (I sometimes ask for the same one again, just giving him a second chance). When I get a correct response I reinforce it with either food, toy or interaction. Then I may ask for that previous behaviour again, to see if this time the dog does it. It's very neutral, non punishing, and does not cause frustration in the dog. The only thing that happens is that he doesn't get any reaction, no words, no treat, nothing. For a period of let's say 2 seconds. Then the life goes back to normal.

The other method is called Cheerful Interrupter and comes from Denise Fenzi, one of my favourite trainers at the moment. The imperative word is cheerful, not gruff, not frustrated, not impatient. Cheerful. I say something silly, walk towards my dog, pat him on the back, tell him he is a very clever boy but this time there will be no treat, or toy. And we try again. The dog is happy, I'm happy, the training progresses quickly. One variation to this is to give the dog a low value reward, as a consolation, since he tried at all, but to keep the very good stuff for the correct responses.

Hope this article gave you some ideas on training. There is always a way to improve the situation for our dogs and I think we should always try our best. 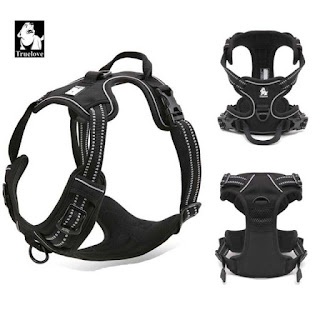 The truth about harnesses

Today I'll let you in on a big dog training secret: harnesses DO NOT teach dogs to pull.
Let it sink in for a moment.
Despite of this being repeated over and over again by even otherwise reputable trainers around, it's an utter nonsense. A harness is a piece of equipment, a few nylon straps and several plastic clips, and a d-ring. It's like saying that buying chocolate will make you fat. It's what you do with it that may make you fat, if you eat it all in one go, you may gain a few grams instantly. If you give it to your friend, you will stay slim but they will get fat, wouldn't that be great?:-)
If you allow your dog to pull you, it completely doesn't matter what they wear. Have you never seen a dog pulling on a collar? Either flat, or half-choke or even a choke chain or a slip lead? I certainly have. And it doesn't look good, and sounds even worse. The dog's body is all strained, his neck bent and his front feet scraping the pavement? His eyes are b… 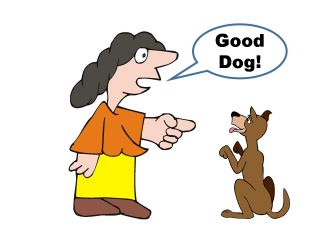 As a dog owner you may have been in a situation where you dog was doing something undesirable, obnoxious, annoying or even dangerous. I'm sure all of us have.
So let's say you have a young border collie who just started this car chasing thing. You go out with him and every time he sees a vehicle, he stops, crouches down, stares at it, and when the car is very close he lunges at it.
This was my story when my Chester was a few months old. He also tried to chase the cars when inside of our car which was really not cool. He was darting back and forth as much as his harness allowed him to and barking in excitement, frustration or both. I contacted a trainer who was recommended by a friend. “A very nice lady”, I was told. She said we have to “nip it in the bud” and that I should bring the dog to her so we can eradicate the behaviour.
Concerned with the tone of her voice I asked how she was going to do that and she had a vague answer of “we'll see what works” and “ we can't a… 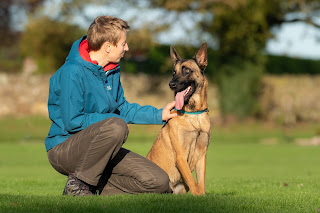 What is positive training? And what it's not?

You have, no doubt, heard about “positive dog training”. If you're reading this post, you're probably following my page and you know that I identify as a “positive trainer”.
So you know that I don't use choke chains, or electric collars, that I use food and other rewards to teach dogs, that I will not yank on your dog's leash or smack him on the nose with a rolled-up newspaper.
That's the picture that comes to mind when you think about this term. This way of thinking focuses on the methods that we do or don't use as positive trainers. Many say they don't use punishment in training (which is, of course, incorrect) or aversive equipment (which is open to interpretation).
This emphasis on methods actually works against us, and the non-positive trainers are quick to point out all the weaknesses of this.
Depending on who is looking and at which angle, they can find that some methods and techniques that we use are, in fact, aversive, even if we think otherwise. It…